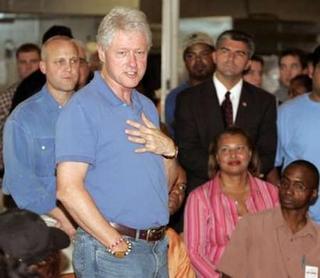 Bill Clinton was in Louisiana today.
If the first black Prez were still our prez I bet he'd insist that all of the 9th Ward would be searched and the dead bodies removed.....

Five weeks after Katrina, New Orleans is calling off the house- to-house search for bodies. Teams have pulled 964 corpses from storm- ravaged areas across southeastern Louisiana. Authorities admit more bodies are probably out there. They'll be handled on a case-by-case basis. The count is far short of the 10,000 dead once predicted by New Orleans mayor. As of today, the death toll from Hurricane Katrina stands at just under 1,200.

Searchers and residents insist there are still plenty of dead to find in New Orleans. Once again, they say the Ninth Ward is being ignored because it is poor and black. Here's CNN's Jeanne Meserve.

JEANNE MESERVE, CNN HOMELAND SECURITY CORRESPONDENT: (voice- over): In pulverized portions of New Orleans's Ninth Ward, where water flows, instead of traffic, most homes bear the signs that search teams have been in to look for the living and the dead, but not in one area that spans several blocks. Here, house after house after house is unmarked.

EDWARD MENDEL, SEARCH VOLUNTEER: From here back, I estimate 100 to 150 homes that are still unsearched. And I do expect we will probably find some bodies.

MESERVE (on camera): Why do you think that?

MENDEL: You can smell them as we drive by.
SNIP
ROZ KAY, FORMER NINTH WARD RESIDENT: We have so many people who were superseniors that lived in these neighborhoods. And they didn't have children or anyone to rescue them all the way out.

MESERVE: If these homes have not been searched and these people found, Roz Kay perceives it as another slap at the Ninth Ward and the people who lived here.

KAY: This is a predominantly black neighborhood, OK? And it's always been neglected. And it's been a hard fight and an uphill fight always. So, I'm not surprised.

MESERVE: Not surprised, but horrified that, more than a month after Katrina rampaged and ravaged through, there may be grim discoveries still waiting to be made.

As we ponder William Bennett's racist comment the evidence of American racism is going almost un-noticed in NO. Tell me if this was a white neighborhood that those homes would go unsearched. We went to great pains to recover every little bit of human remains at Ground Zero but in Black America we won't even bother to pick up bodies. This is an outrage. That practically no one is saying so is even more outrageous. How quickly we forget. Let's not forget these people's dignity Again.

UPDATE: Welcome to readers from the many blogs that have linked. I'm afraid too many to list. But glad you are here to read this.
From the comments I hear alot of rage and some are contacting their reps.
To help that along here is a link to find your Rep/Senator and email them.

UPDATE: Call 911 if you find a body but 9th ward residents complain they can't get to neighborhoods....So who will find the bodies or make the calls?