The fight over the Baker bill that would aid Louisiana Katrina victims by providing funds to buy out their homes at 60% equity got serious Thursday….

The debate over how to rebuild homes and communities destroyed by Hurricane Katrina erupted into public warfare between Louisiana and the White House on Thursday as the Bush administration sharply denounced the state’s preferred solution and the author of the Louisiana plan accused the administration of misleading the public in an effort to kill the proposal.
Bush’s reconstruction czar Don Powell launched a “media blitz” that included an op-ed in the Washington Post and TV appearances and a press conference in which he announced another 18 billion for hurricane relief. However details on where the money would go will not be available for another 10-30 days.

Richard Baker a Louisiana Republican, and sponsor of the popular Baker bill was Outraged…..

“That Mr. Powell would take out op-ed space specifically to undermine my legislation is disappointing to say the least,” Baker said in a written statement. “That he would use that column to spread gross mischaracterizations of the legislation is just disturbing. If I had any worries that my legislation was dead, I am now certain that it isn’t, or else Mr. Powell would not be shooting at it.”
He said that the White House suggestions that Louisiana’s housing problems can be solved by helping 20,000 homeowners outside flood zones rebuild is ludicrous, given the estimates that 200,000 homes were either seriously damaged or destroyed.

“If you relegate the solution to just helping people outside the flood zone then your relegating most of our country to not receiving housing help in the event of a major catastrophe like Katrina,” Baker said.


Later in the day Baker got a call from the White House saying let’s talk about housing.


If the administration would devote a sizable portion of the new $18 billion to housing in Louisiana, Baker said, “We could be a long way to meeting the problem.”

But early indications are that the emergency financing is intended for the Federal Emergency Management Agency, Department of Housing and Urban Development and Small Business Administration, and perhaps for damaged military facilities in the hurricane zone, not for new major housing restoration programs.

Reaction to the new spending proposal was uncertain because no details were provided.


The Bush administration has never supported fellow Republican Richard Baker’s bill which does have bi-partisan support in Louisiana. Of course they won’t give details on the $18 billion for 30 days. They are stonewalling. The Senate Banking, Housing and Urban Affairs Committee has agreed to a Feb. 15 hearing on the legislation at which time the bill will either live or die. If the administration dangles enough out there to make it look like they are going to do something then the bill will be seen as unnecessary. If they can get through 30 days with that, the bill goes away and so does Louisiana’s best chance for recovery.Don't trust that in 30 days Bush will will put any of that $18 billion to buy out home owners. If that was the intent they would have said so now.

I know you would want to do something worthwhile to help the Louisiana victims of Katrina. This is your chance. The Baker bill is very popular in Louisiana. People want it because it is essential to recovery. Without the Baker bill everything that 200,000 homeowners had will be worthless. Absolutely worthless. They will face foreclosures and walk away from their former lives with nothing. And developers will buy the land up cheap and make a killing. (one of the most prominent developers is a Bush pioneer and leader of the NOLA rebuilding commission…. Read about this after the jump)

Hold Bush to his promise of rebuilding NOLA.

Scout’s analysis on the Baker Bill from scoutprime Jan 26…..

I am almost surprised at the Bush administration's transparent support in helping big business rebuild NOLA. Amongst residents and LA officials there has been widespread support for the Baker Bill which has been viewed as absolutely essential to rebuilding NOLA. However Bush has never supported it and informed Baker earlier this week that the White House will not support it now or in the future.

The bill would add a federal bureaucracy and set up what would be a government real estate agency, "which we don't think is a good business," said Mr. Powell, a former chairman of the Federal Deposit Insurance Corporation.
It's no coincidence that 2 of New Orleans biggest businessmen on the Bring Back New Orleans commission are not concerned about passing the Baker Bill. Real estate developer Joe Canizaro was in fact foretelling for it's demise 2 weeks ago...

However, Canizaro also said that even without the Baker bill, he thinks enough federal money will be available -- in the form of Federal Emergency Management Agency grants and other sources -- to make homeowners whole. The panel estimates it will cost $12 billion to buy out every home that received at least 2 feet of water, but Canizaro said he expects only half of the flooded homes will be bought out in the end.


And Donald Bollinger is quoted in today's NYT saying this......

"Everybody wants to think that if the Baker bill fails we have no other solution," he said. "I don't agree with that at all. I know we need a tool similar to that."
It's laughable that Bush is worried about adding federal bureaucracy when he had no problem in doing just that with the Medicare Part D plan. What is important here is what is "good for business." Adding clumsy bureaucracy is OK if Big Business structures it and profits from it. If not, then another "tool similar" will be found.

It must be asked just what "tool" exactly are the Bush Boys, Canizaro and Bollinger, and fellow big businessmen on the Bring Back New Orleans commission looking for? Clearly it's not the Baker bill.

A little history first. There were 3 NOLA rebuilding committees formed initially: the Mayor's, the City Council's and the Governor's. But it was the Mayor's Bring New Orleans Back (BNOB) commission that prevailed when Bush met with and supported them....

That's not all that differentiated them. Canizaro who has been the leading force in the BNOB commission contributed over 1 million dollars to Republicans since 1997. Bollinger, who owns the 3rd largest shipbuilding company in the country, contributed over $130,000. Canizaro was one of 22 wealthy business leaders whom President Bush invited to lunch in 2001 to discuss his tax cut for the wealthy. Is it all that surprising that Bush"sanctioned" them to be the rebuilders of NOLA?

And there is evidence they are dominating the BNOB commission. The NYT reported in October that there were "sharp divisions"and several areas of "trouble" within the BNOB one of which was some commissioners stating they were the "B team" that was being excluded from meetings. Meetings which Canizaro did attend. Two commissioners stated this at the time.....

"No one goes over with us what they discuss at those lunch meetings," said Oliver M. Thomas Jr., one of the commission's 17 members and president of the City Council. "It would be nice if they did."
Added W. Anthony Patton, a small-business owner on the commission, "Let's just say I haven't been invited to any lunches, either."


So just what is being planned by the Bush Boys in these secret meetings? There may be some clues. Powell said that the $6.2 billion in Community Development Block Grant funds will go to help 20,000 homeowners. Yet there are over 200,000 homeowners whose homes have been destroyed. What will happen to the other 185,000? I doubt they will see any CDBG money as "Mr. Powell has all but put state officials on notice that close watch will be kept on the Community Development Block Grant money." And Mr. Bollinger concurred saying, "I think we have to demonstrate to Congress and the president that we are going to handle our C.D.B.G. grants responsibly."

Now think about that a minute. In effect they are saying they will do everything possible to make sure only those 20,000 homeowners receive a federal government buyout and none of the other 185,000.

So what fate awaits the rest? Without government money it appears they face either......

1) free market forces determining what they will receive

2) Eminent Domain...... "commissioners say, not every neighborhood will be sustainable and there will be a need to use eminent domain to seize some property"

So if you severely limit the number of people to receive a buyout you leave a large number of homes (ie Land) available to be bought up cheap or taken. With that much land on the market at once and sellers needing to sell, it most likely will be very cheap

Just kill the Baker Bill, be so called 'good stewards' of CDBG funds and viola.

It's a Bush Boy's dream come true.........buy the land cheap, develop it and then the Big Payoff.

You know it may be more accurate to say Bush is THEIR Boy after all.

UPDATE: Read Baker's & bankers Reaction on how Bush's plan will render land worthless and be a "death blow" to Louisiana.

Of course as I've stated above developers will profit handsomely
Posted by scout prime at 4:42 AM No comments:

Homeland Security head Michael Chertoff’s role in the Katrina debacle is slowly coming to light and it isn’t pretty. The GAO released a critical report today in which they placed blame upon Chertoff for not providing leadership and not activating the National Response Plan on time or properly. (see earlier post) It appears the Senate has Chertoff in the crosshairs also. Joe Lieberman asked Ray Nagin today at the Katrina hearings about a story he heard……

LIEBERMAN: I heard a story I want to ask you if you could recollect it in your own words that sometime later in the week perhaps Saturday, Secretary Chertoff came to town and went to the FEMA staging area which was at the New Orleans Saints practice field

NAGIN: Ya…You heard about that huh?

Here is VIDEO of Nagin’s account of the story (Direct link, 3 minutes)


As I said earlier, there should be calls for Chertoff’s resignation.
Posted by scout prime at 4:26 AM No comments:

God Is Watching Us

Here's a music video of my visit to the 9th Ward...
Music: Nanci Griffith
9th Ward: God is Watching Us

I hope you'll
go
to
the
New Orleans Blog
Posted by scout prime at 2:46 PM No comments:

OK last week I hinted at more news to come. Well here it is. Some folks who are regular commenters at another blog have decided to try to raise funds to send me to New Orleans! A website is now up and running that explains what is happening and how to contribute if you so desire. It is also an opportunity to get involved in the news you want.
So I hope you go vist the site HERE.
Peace
scout

UPDATE: Grand News! In less than 24 hours we have met our fundraising goal!!!!
Thanks to everyone. I will be blogging from New Orleans Feb. 27-March7
scout
Posted by scout prime at 7:23 PM No comments:

Posted by scout prime at 6:27 AM No comments: 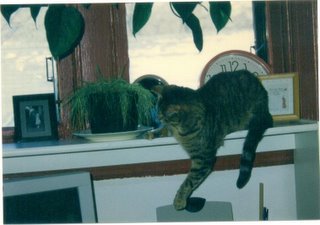 We're hanging out at First Draft.

I'm not abandoning this blog but my energy will be going into First Draft.
Teddy and I hope you will come visit.
Posted by scout prime at 4:39 PM No comments:

Nagin has a story about Chertoff 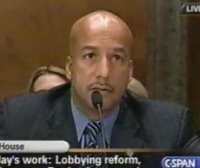 Nagin had this story about Chertoff today.

CLICK to VIEW Video
Posted by scout prime at 12:43 PM No comments: